Middle East – the starved “end of the world”

Middle East – the starved “end of the world”

The humanitarian crisis in Syria is probably second only to one after the Second World War – says Wojciech Wilk of the PCPM. In terms of the scale of this unprecedented crisis, it is many times bigger than the one that took place during the war in Yugoslavia. The length of the conflict is comparable to World War II, but there is no hope for solution. According to Wilk, experiences from Afghanistan show that even post-conflict reconstruction of the state may take several years.

The effects of the crisis radiate throughout the whole Middle East. There is a very bad situation in Iraq as well, where ISIS is in control of part of the territory. In Bagdad alone, 1.5-2 million people were forced to escape. Two million people live in camps in the region of Kurdistan, says Wojciech Wilk.

The collapse of agriculture and blocks on trade are causing a shortage of food. Syrian authorities led by Assad, who controls the areas inhabited by 85 percent of Syrian citizens (the Islamic State has taken over larger expanses of desert) have almost no financial sources and are supported by the Central Bank’s reserves and loans from Iran. Besides, governmental structures are inefficient and corrupt, because, as Ryszard Kapuscinski wrote in “Ebony”, “between those who want to eat, and the full warehouses stands a tall hurdle: the political game.” 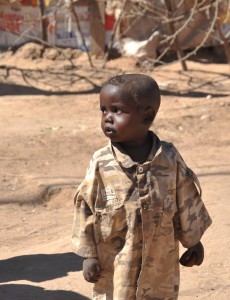 The inhabitants of the Middle East, who have known poverty many times in history, have developed a “crisis menu” that allows them to survive. There is such a practice, that when times are tough, many people rely on bread and sweet tea, that will help people survive for a few years – says Wojciech Wilk. This method does not work, however, in the case of children who need nutrients in their diet. They are the ones suffering the most from malnutrition: they are weak, underweight and poorly developed. Their weakened immune system does not protect them against diseases.