In July, the image of the Somali child dying of hunger spread all over the world. Mihag Gedi Farah was 7 months then and weighed 3.4 kg. Thanks to intensive care in a refugee camp in Kenya’s Dadaab, the child miraculously survived. The photographs, presented yesterday by the International Rescue Committee (IRC) show a plump and cheerful boy. Small Mihag learns to crawl. But the humanitarian catastrophe in Somalia continues.
– The famine in Somalia is not over, children are dying here every day – says Hannan Sulieman, UNICEF representative. The organization will conduct humanitarian assistance at least until August or September next year. During the next few weeks168,000 may die. 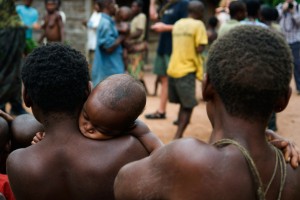 Mihag’s family, like hundreds of thousands of Somali refugees, fled the country due to war and hunger. In July, Mihag was taken to a hospital in the Kenyan Dadaab, the world’s largest refugee camp. At the age of seven months the boy weighed less than 3.5 kilograms, less than some newborns. The photo of the shockingly emaciated boy with big frightened eyes has become the symbol of famine in Africa. After weeks of intensive care and feeding with appropriate nutrients, the baby now weighs 8 kg.
– His mother did not believe she would manage to rescue him. The whole family is very happy – said Sirat Amin, a nurse-nutritionist from the IRC, who took care of the boy. She added that Mihag already knows how to sit alone and is learning to crawl.
The misery of the refugee camps in northern Kenya, where, despite efforts, tens of thousands of children have already died, attracted international humanitarian assistance. Now the number fleeing from Somalia has been reduced considerably, but help is still needed.

The UN says that despite the actions controlling the border between Islamists and continuous fights, humanitarian agencies expand their reach – food is delivered to 2.2 million Somalis. It means progress, but it means that another 2 million still do not have the possibility of help.

Aid for Orphans Relief Foundation is trying to do everything that it can to support children at risk around the world. Supporting our organization is a way you can save many children from suffering and death. Please consider donating to AORF and help us save children.